“ The music around here went from generation to generation. I got it from my father and he got it from the likes of the old fiddlers before him.” – Jim Doherty 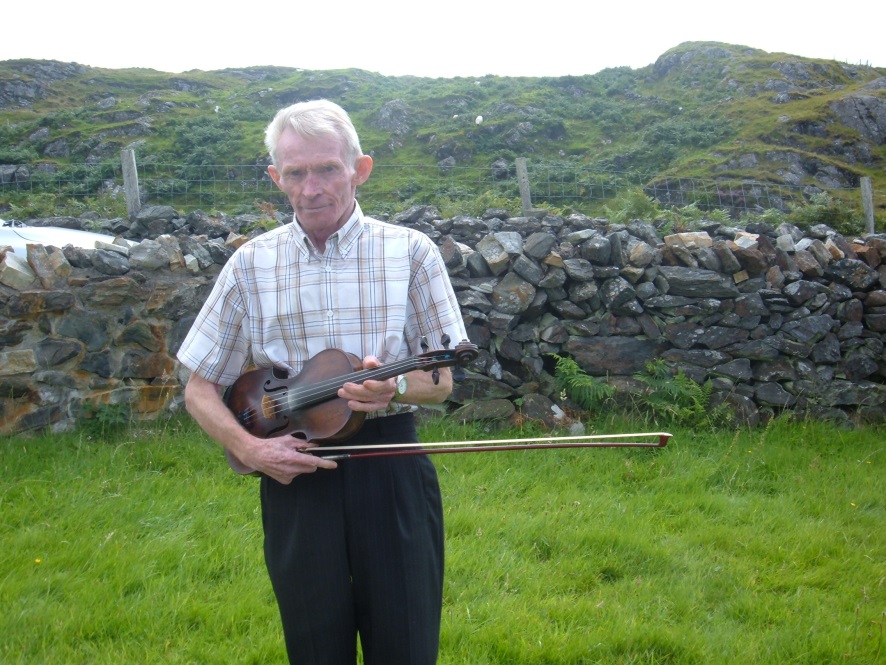 If ever there was a man who encapsulated the gentlemanly nature, humour and pure love of playing Donegal fiddle music either at home in his kitchen, for dancers or in public company, it was Jim Doherty. Jim was born on the family farm in Legnahoorey on June 10th, 1939. His earliest experiences of learning fiddle came in the family home through picking up tunes and guidance from his father. His older brother, John, had also begun to play fiddle through their father’s teaching and he also helped Jim pick up tunes. From the start Jim was an enthusiastic and conscientious pupil learning tunes quickly. He took great delight in playing with his father and brother. His father’s accounts of learning and playing with Robert Sproule and Matthew Buchanan were the stuff of legend and wonder for Jim and drove his desire to learn and improve his playing. Though naturally left-handed, he followed the custom of the day and learned to play the fiddle as if right-handed. His early repertoire consisted of the tunes his father had learned for house dances playing with Sproule and Buchanan and he would play these routinely throughout his life. His earliest years of playing coincided with the last throes of house dancing in the area and Jim would be taken off to them to partner his father in providing the fiddle music for the dancers.

Like so many before him, at the age of eighteen Jim followed the well-worn path to Scotland to work. The demands of earning a living there meant the fiddle was left at home and there was neither time nor social outlets for playing a fiddle. He did manage to hear a good bit of fiddling in Scotland and it keenly interested him as he recognised the considerable commonality in repertoire and playing techniques he knew from his home in Donegal.

Upon his return to Legnahoorey he worked the family farm. During a trip into Letterkenny Jim happened to meet Hughie McGovern who had come as a teenager to the town from his native County Cavan. Hughie, a good fiddler, was dynamo in terms of organising and promoting traditional music in the town. The two recognised kindred spirits and Hughie greatly encouraged Jim to travel into Letterkenny and started playing again. Jim became a regular attender at sessions organised by Hughie which would put him in the company of local fiddle players and luminaries which included at times Frank Kelly, Tommy Peoples and Jimmy Houston of the Finn Valley, as well as Vincent Campbell of The Croaghs. He eventually began attending regular sessions in Downings and met his long-time playing partner, Hughie McLaughlin. Later he would meet Nora Friel of Umlagh, Carrigart. Nora had learned violin at school but eventually gave up playing. After meeting Jim years later he would encourage her to take up playing again which she did with enthusiasm. Under Jim’s influence she became an accomplished player who found joy in the music.

The marvellous fiddler, Paddy McMenamin, of An Ghaeltacht Lár came to meet Jim and became not only a close friend but a regular visitor to Legnahoorey for tunes. Their styles, again deeply rooted in house dance tunes and music, meant they were a natural duet.

Jim was a lovely and lively player who had a great respect for the integrity and history of a melody. His playing was infused with the rhythm of playing for dancers. He was always careful to play a tune to the best of his ability out of pride in the tune and an appreciation for the tradition. He had a great regard for where the music came from and those who passed it on.

The degree to which Jim appreciated and enjoyed the music was infectious. His natural humility meant that he was not terribly interested in promoting himself or his playing. In Jim’s later years he was a regular attender of the Saturday morning workshops delivered by Tommy Peoples when Tommy was the Artist in Residence at The Balor Theatre in Ballybofey. Jim would always be the first one there and would take out his fiddle and play. When Tommy would arrive, he would quietly wait and listen to Jim play a number of tunes. Tommy once noted that the greatest joy in his time as Artist in Residence in The Balor was listening to Jim play. While Jim was a tremendous admirer of the artistry of Tommy’s playing there was always the sense that the feeling of appreciation was very reciprocal.

Jim’s passing on April 1st, 2012 saw the Donegal tradition lose one of its most humble, respectful and enthusiastic players. A saying of his, ‘who can tell which were the bones that wore the ragged jacket’, mirrored his great human respect for one and all. He was a gentleman to his fingertips and a wonderful fiddle player to meet and play with.

Until recently when asked where they had learned their music, it was commonplace to hear older fiddlers reply by saying ‘at home and at the house dances’. House dances were a staple and important formative part of the traditional Donegal fiddlers learning experience. The sweet-toned, precise fiddler Danny O’Donnell of Meenbanad in the Rosses was sometimes heard to say ‘I cut my eye teeth of fiddling by playing for house dances’.

Since the general demise of house dances in the 1930s, it has been an increasingly less common experience for a Donegal fiddle player the experience the old style house dance. Certain aspects of playing which were needed to play for a house dance were no longer required in session playing which has replaced the house dance as the social gathering point for Donegal fiddlers since their rapid growth in the 1960s. Aspects of dance rhythm and tempo are no longer determined in the absence of good, well-practiced dancers. A repertoire incorporating the tunes required for specific dances such as The Corn Riggs, The Eight Step Polka, The Petronella and others become eclipsed by the musician’s desire to learn a store of challenging reels. In short, it is increasingly difficult to understand and musically relate to the house dance for modern Donegal fiddle players.

Besides many happy memories of the man, a significant part of Jim Doherty’s legacy in the world of Donegal fiddle playing has been his preservation of local versions of tunes played for house dances in north Donegal that firmly echo back from his father, Neil, neighbours Matthew Buchanan and Robert Sproule and others. It is a sound and system of playing that was integral to the social life of rural communities of the past in County Donegal. His recordings permit us to stand, as if outside the cottage window of the past and hear that style of playing and recognise that those making this music, like Jim Doherty, did so because it was like an irresistible cultural magnet drawing them to an art form they cherished.

Cairdeas na bhFidléirí wishes to express our sincerest thanks to the Doherty family for its support for this project. We wish to acknowledge kind assistance of Jackie Small, Terry Moylan and Pete Clarke in assisting with the identification of the tune titles for a number of the less well-known tunes played by Jim. Likewise, we are grateful to Patrick McBride of Mulroy Bay Music for sharing a number of tracks of Jim Doherty’s playing with us.
This project has been funded and made possible through Cairdeas na bhFidléirí’s Annual Strategic Grant from the Arts Council.